After drenching vast swathes of Oman for nearly 10 days, the ridge of low pressure behind the country’s unprecedented wet weather spell appears to be finally losing some steam, according to the meteorological department.

The latest weather bulletin by the Directorate General of Meteorology and Air Navigation (DGMAN) has predicted more isolated rains over Thursday and Friday, but these are likely to be limited to the mountainous Hajar region and some surrounding areas. This is a far cry from the weather system’s previous reach that extended from the arid western edge of the country to the Sea of Oman coast on the east.

On Wednesday, lakes emerged in the arid wilderness of Oman’s Dhahirah and Dakhiliya regions as thunderstorms unleashed more rain across the northern half of the country, sending water levels in recharge dams and reservoirs soaring.

In the Saham district of North Al Batinah, a tide of floodwater from Wadi Al Humaira inundated nearby homes, prompting the evacuation of around 50 families by the emergency services. A statement issued by the Public Authority for Civil Defence and Ambulances (PACDA) said the evacuees have been housed in schools in Saham town. A number of people were also rescued from their vehicles marooned in flooded wadis elsewhere around the country.

Ahead of an extended three-day weekend break that began across Oman on Thursday, authorities urged the general population to take precautions when enjoying the outdoors. Advisories issued by the Royal Oman Police warned people against crossing flowing streams or venturing into waterlogged areas. 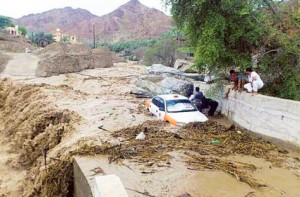 The three-day holiday in Oman stems from the country’s historic transition from the Thursday/Friday weekend to the regionally embraced Friday/Saturday break, which takes effect this weekend.

A public holiday declared by the government on Thursday means that thousands of people, who had been forced to remain indoors because of the damp weather during the preceding week, will now have an opportunity to venture into the outdoors, potentially posing more headaches for the emergency services.

If the bad weather did cost lives — eight deaths to date — and disrupt normal lives, it also made a significant contribution to the country’s usually precarious groundwater situation. Monitoring stations at the country’s network of recharge dams and reservoirs reported hefty increases in water levels during the past week.