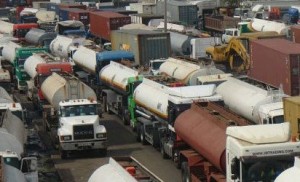 The national leadership of the Nigerian Association of Road Transport Owners, NARTO, has appealed to Petrol Tankers Drivers, PTD, branch of the National Union of Petroleum and Natural Gas, NUPENG, to shelve its planned nationwide strike due to commence on 23 May.

The leadership of PTD had given NARTO a two-week ultimatum, starting from 9th May, after which all their members nationwide will withdraw their services, thereby crippling the supply of petroleum products throughout the country if their demands are not met.

The dispute is about the agreement PTD has with NARTO on review of salary and condition of service which was signed and was to take effect from August, 2012.

NARTO has, however, appealed to the leadership of PTD not to call out its members on strike as the said agreement will be implemented when the funds earmarked for the implementation are released by the Federal Inland Revenue Service who is holding on to the excess of 5% withholding tax wrongfully deducted by major oil marketers from road transport owners.

The refund has been approved by the government through the Petroleum Products Pricing Regulatory Authority, PPPRA.

In a letter to PTD, National President of NARTO, Alhaji Kassim Bataiya, said “We wish to state clearly that the association acknowledges the existence of the agreement between the national leadership of NARTO and that of PTD in respect of the review of salary and condition of service for our drivers, your members, which was signed and to take effect from the August, 2012. We assure you that our association is still bound by the content and spirit of that agreement”.

Bataiya explained that the inability of NARTO to immediately implement the agreement was due to the refusal of FIRS to release already processed part of the wrongly deducted tax amounting to N2.7 billion to NARTO.

According to him, the failure of the FIRS to release the money adversely affected the expected income of his members thereby making it difficult for them to meet their obligation as contained in the agreement. He said NARTO was committed to ensuring harmony in the downstream sector of the petroleum industry and availability of petroleum products in all the nooks and crannies of the country.