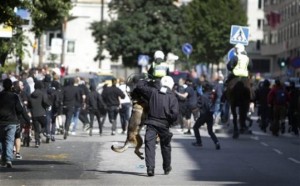 Around 200 people hurled rocks at police and set cars ablaze in a Stockholm suburb during a third night of rioting, which residents said was triggered by the fatal police shooting of a man wielding a knife.

Dozens of windows were smashed, 10 cars and several containers were set on fire, and seven police officers were injured on Tuesday.

Police said five people were being held over the rioting, and six others had been released after questioning.

Cars and containers were also set ablaze in Fittja, another Stockholm suburb, although police said it was not clear whether the two events were linked.

The unrest began on Sunday night. A May 13 incident in which police killed a 69-year-old man who had locked himself in an apartment in Husby, west of Stockholm, has been cited by some residents as the trigger of the riots, but bigger frustration among youth has also been cited as the reason.

Around 80 percent of the roughly 11,000 residents of the suburbs are first- or second-generation immigrants.

Police have refused to give the nationality of the victim of the shooting.

Many local residents see the shooting as an example of police brutality, and the violence has stirred debate in Sweden.

Prosecutors have launched an internal probe into the shooting. Police say they shot the man in self-defence because he attacked them with a knife when they broke down the door to an apartment where he had locked himself up with a woman.