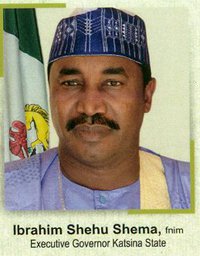 Governor Ibrahim Shehu Shema of Katsina State has disowned his 2015 campaign posters reported to have surfaced in some parts of Lagos and Abuja.

In a statement made available to the Press by the governor’s Chief Press Secretary Alhaji Lawan Matazzu, Shema attributed the posters to the handiwork of mischief makers, saying he had not shown interest in the 2015 presidential race.

According to the him, the remaining years left in his tenure would be concentrated on the ongoing works in the state and vowed not be distracted by mischief.

The governor said: “I was shocked by newspaper reports that posters indicating my interest in the 2015 presidential race have flooded Lagos and Abuja when I did not print the posters or commissioned anybody to do so. This is obviously the handiwork of mischief makers and I have since directed the posters removal.”

He added: “It is absolutely important for all men and women of goodwill in Nigeria, at this point in our country, to support the federal government and Mr. President’s efforts in addressing the current security challenge in the country instead of mischief creation and unnecessarily heating the polity.  I urge Nigerians to ignore the posters or any activity the mischief makers may engage in about me concerning the 2015 race because it is a needless distraction as I still have over two years to serve dividends of democracy to the good people of Katsina  State.”