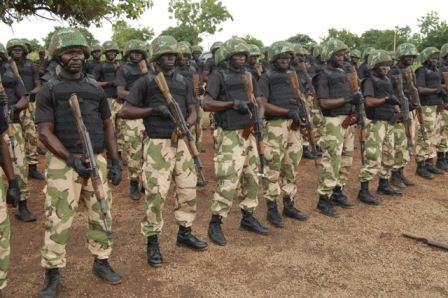 The Defence Headquarters said on Monday that it  captured 25 insurgents and killed three others, including a high profile terrorist identified as “Abbas”.

A statement issued by Brig.-Gen. Chris Olukolade, Director, Defence Information in Abuja, said Abbas had been on the list of most wanted persons.

The statement, which gave an update on the ongoing military operations in Borno, said the incident occurred during an encounter between troops of the Special Forces and the insurgents.

It said that the insurgents had finalised moves to carry out extensive operation around Maiduguri.

The statement also said the insurgents succeeded in killing some military personnel.

It added that the troops intercepted a message sent to fleeing insurgents urging them not to give up but to fight to the end.

“The attempt by some of them to heed the call was foiled during the weekend as they were trailed to some settlements and towns towards the border where they planned to regroup.

“The captured ones were all apprehended with their weapons which include rifles, pistols, double barrel guns and various calibers of ammunition during an operation by the JTF in Kumshe and Bulunkutu area,” it said.

The statement said that Multinational Joint Task Force had raided and destroyed the assembly points of the insurgents at the outskirts of Kaneram Dan Katsina, Tumbu Dabino and Mallam Fatori, north of Baga.

It said the towns and settlements had been secured while cordon and search operations were on in the area after the insurgents had been dislodged.

The statement said troops of the Special Forces had freed a man taken hostage in the Sambisa forest in Borno, since 2012 after combing the area.

“The freed hostage is being treated by the Task Force.

“The troops are dominating the forest as they find a number of fresh graves, more arms and ammunition, burnt vehicles and other equipment,” it said.  (NAN)