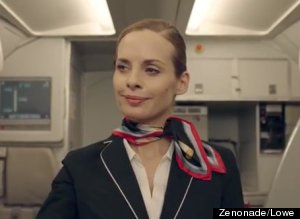 A new ad for a “relaxing drink” features a flight attendant telling herself that all the passengers are going to die.

The online commercial for Zenonade in the Czech Republic was posted on YouTube May 2.

In the ad, by the Lowe and Partners agency in Prague, a stewardess completes pre-flight safety instructions. While pointing at passengers, she tells herself, “I’m going to be the first to leave this plane, and you’re all going to die.” As the camera scans the cabin, she says, “Dead. Dead. Dead.” She then points at herself and says, “Alive.”

As a voice on the intercom says, “We wish you a pleasant flight,” the stewardess flashes a ghoulish grin. The tagline reads: “Zenonade: At Your Own Risk.”

“I expected it to be worse,” he said, later adding, “This is not meant to be serious.”

The voiceover is in English so the ad can be shown at advertising festivals, Lochmann said. He said the agency has no plans to change it for the Czech market, because the language is easy to translate.

The commercial’s YouTube copy explains, “Zenonade is the only relaxing drink on the market, which is full of energetic dinks [sic]. It has one small disadvantage. Zenonade has never been tested, so no one knows what relaxing effect it has on people. That is why our new communication recommends to drink it at your own risk.”

Buckle your seat belts, folks. This ad could have a bumpy ride.