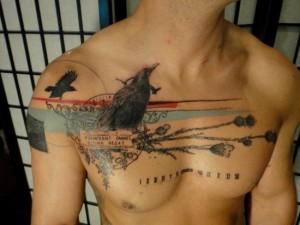 If you’re going to get a tattoo, why not go for something truly beautiful instead of the usual tribal, heart, dragon or those tacky Chinese characters that people seem to love so much. Five years ago, French tattoo master Xoïl aka Loïc adopted a new artsy style called the “Photoshop Style”, which really gives “skin art” a whole new meaning.

Xoïl was born in a very small village in Southern France, where his father worked as a mason, creating beautiful things out of stuff other people just threw away. Watching his father at work inspired him to leave the rural life behind and start making cool stuff himself. He never had a formal apprenticeship under a tattoo artist, because they all had these “old-school crazy ideas” he just didn’t recognize at the time, so he simply hung out at tattoo shops picking up the basics and developing his unique style. And it shows in his current artworks. Xoïl’s style is so distinct from other skin artists’ that you can recognize one of his pieces on sight. Combining clients’ ideas with stamp-like textures, typewriter-inspired fonts and geometric patterns, the French master creates incredibly beautiful works of permanent body art that have caught the attention of tattoo enthusiasts around Europe and the US.

Talking about his Photoshop Style tattoos, Xoïl says: “The goal of my work is to bring people to a new reflection of the stuff that they want, to concentrate on the emotion behind the need of the tattoo—to bring people somewhere they didn’t expect. Sometimes you see a splatter on the street and you know that it is beautiful but you don’t quite understand why. It is because the balance is perfect. That is what I am looking for in my work, balance.” He doesn’t like people coming into his studio and asking for a specific design, as he works by taking their loose ideas and giving them a personal touch to come up with something truly unique. “You can’t really ask me to do something exactly that way,” he tells Tattoo Snob. “I want something really general, I need to compose around an idea and find a good answer to your need. And maybe sometime I will have to pass by a way that you didn’t expect to get there. So yes, I guess the best is a loose idea.”

Xoïl has his own tattoo studio, in Thonon les Bains, France, but spends a lot of time in the US as well, where he’s better known as Loïc. I’ve posted some images of his most impressive works, but you can check more of his stuff or get in touch with the French master on his official Facebook page. Enjoy!