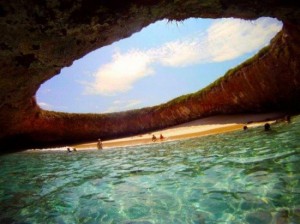 If it weren’t for the sound of the waves gently washing up on its fine sand beach, people would probably walk right past Playa del Amor without even knowing it was there. Located several meters inland on one of the Marieta Islands, the Hidden Beach is one of those unique natural wonders you definitely don’t want to miss.

The Marieta Islands archipelago, located off the coast of Puerto Vallarta, Mexico are believed to have formed centuries ago due to volcanic activity in the area. During the early 1900s, the Mexican Government took advantage of the fact they were completely uninhabited and used the islands to conduct military tests. After years of research and efforts to legally protect the archipelago, scientists led by the famous Jacques Cousteau managed to convince Mexican authorities to declare the Marietas a national park protected against fishing, hunting and any other harmful human activities.

To this day, the islands remain uninhabited and only authorized boat service providers can take tourists to see their natural wonders up-close. Although the large explosions and bombings carried out for decades have greatly damaged the flora and fauna of this tropical paradise, some say they’re also responsible for the creation of one of its most amazing attractions – Playa del Amor, also known as the Hidden Beach of Mexico.

This magical place is only accessible through an eighty-foot tunnel linking it to the Pacific Ocean. Visitors have to swim their way through to this secluded paradise, but since there’s about six feet of space between the water and the rocky overhang, there’s no need for scuba gear or even them holding their breath. Playa del Amor is such an incredibly beautiful place that when the first photos of it were posted online, most people didn’t even believe such a place exists in real life. But just like the equally stunning Playa de Gulpiyuri, in Spain, the Hidden Beach is indeed a very real wonder of Mother Nature. If you’re still not convinced, I’ve posted some videos shot on location, as proof.