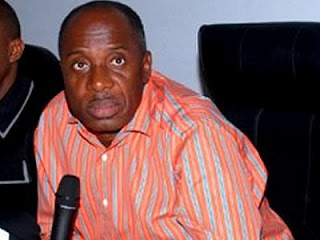 Former Minister of Petroleum, Professor Tam David-West, has decried the crisis bedeviling the Nigeria Governors Forum, NGF, where some governors have rejected the process that produced Governor Rotimi Amaechi as its chairman.

David-West, who spoke Tuesday night when he led a delegation on a courtesy visit to Amaechi at Government House, Port Harcourt, Rivers State, said the Governor was a victim of injustice.

The former minister wondered how it could be rationalized that 16 votes were higher than 19, in reference to the outcome of the NGF election.

He said: “We are going through very strange times in Nigeria; stranger still that 16 are now more than 19.

“Our governor is going through very difficult times. Fortunately, he has the stamina, strength and fortitude to endure.”

According to the Professor of Virology, who is also from Rivers State, Amaechi has performed better than every other governor the state has ever had.

It is believed he made the statement in a veiled response to Dame Patience Jonathan who was reportedly quoted as saying that Port-Harcourt has lost its beauty and glamour since Amaechi became governor.

David-West added that anyone who disputes Amaechi’s performance is “blinder than the bat”.

In his words: “I have followed the history of all governors to Governor Amaechi and from Diette-Spiff to him, I make bold to say without any apologies or regrets that no governor has focused himself to elevating Rivers State, Port Harcourt than Governor Amaechi. It was, I think in Buguma, I said, when the governor was visiting Buguma to campaign for election, they honoured me to speak and I said ‘anyone who says that Governor Amaechi has done nothing for Rivers State or Port Harcourt is blinder than the bat’”.

He condemned the suspension of Governor Amaechi from the Peoples Democratic Party, PDP, even as he reaffirmed his support for the embattled governor.