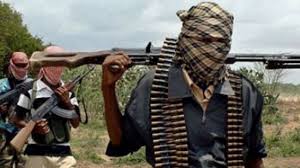 Residents of Ngomari Airport Ward ‘Bakin Borehole’ area in Maiduguri, Borno State capital, were shocked to hear the chilling confession of a member of the Islamist sect, Boko Haram, who claimed to have killed 23 people in two days, including a village head and Police officers in the area.

The suspect, who was arrested Tuesday evening, reportedly started living in the area when he rented a room there about a year ago.

A resident of Ngomari, who pleaded anonymity, narrated to newsmen yesterday in Maiduguri how the sect member was apprehended wearing a jeans trouser and vest at a borehole where he went to fetch water.

According to him, the sect member who was arrested by vigilante youths, called ‘Civilian JTF’ was a resident of Gwange, considered a stronghold of the sect.

He said the arrest was made possible with the help of a younger brother of the suspect who led the youths to Ngomari where the suspect had been hiding.

The resident said: “We were shocked when we heard that Civilian JTF came and arrested a sect member in our area. We never imagined we could have somebody like that in our area because we have been living peacefully.

“We were most shocked when the sect member confessed that he killed 23 people in two days. That is horrible and unimaginable but a reality.”

He added that while the arrested sect member was undergoing torture in the hands of the youth, they also made inquiries about one Idris Musa, who they believed was a member of the sect.