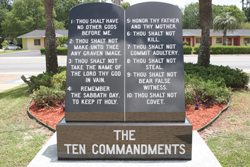 A monument to atheism now sits near a granite slab that lists the Ten Commandments outside a courthouse in a conservative north Florida town.

The New Jersey-based group American Atheists unveiled the 680-kilogram granite bench on Saturday as a counter to the religious monument in what’s called a free speech zone.

About 200 people attended the event. Most were atheists, but a few protesters attended as well, including a group with signs that read “Yankees Go Home”.

The atheists sued to try to have the Ten Commandments removed, but dropped the case when they were told they could have a similar monument.

Here’s how it happened. In October 2011, Bradford County, Florida established a “Free Speech Forum” outside its courthouse, allowing private groups to place monuments at their own expense. Last May, the Community Men’s Fellowship, a local Christian group, took advantage of that arrangement, placing a 5-foot, 6-ton stone slab engraved with the Bible’s Ten Commandments. 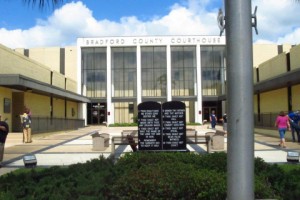 But that violated separation of church and state principles—or so alleged advocacy group American Atheists, which took Bradford County to court. Faced with a costly legal battle, the county asked the Community Men’s Fellowship to remove their monument. They refused.

So the case ended in a compromise: the Ten Commandments slab would stay, but American Atheists would be allowed to put up their own monument, as well. Hence, the 1,500 lb granite bench, which will be engraved with secularist quotes from figures like Thomas Jefferson and Benjamin Franklin, as well as American Atheists founder Madalyn Murray O’Hair.

“We have maintained from the beginning that the Ten Commandments doesn’t belong on government property,” said American Atheists President David Silverman in a press release. “There is no secular purpose for the monument whatsoever and it makes atheists feel like second-class citizens. But if keeping it there means we have the right to install our own monument, then installing our own is exactly what we’ll do.”

The bench will also feature quotes from the Bible listing punishments for breaking the Ten Commandments, like execution—a move that’s designed to “make it clear that the Ten Commandments are not the ‘great moral code’ they’re often portrayed to be,” as American Atheists Public Relations Director Dave Muscato has said.

The Community Men’s Fellowship’s Ken Weaver told the Christian Post that while they don’t agree with American Atheists’ stance on religion, they do believe in their right to freely express their beliefs. “God worked this out,” said the group in a Facebook statement.