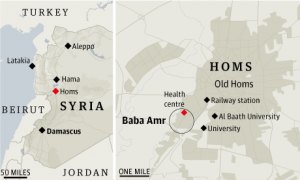 Syrian conflict continues as peace talks slated to hold in Geneva failed to hold. Syrian regime forces have now launched a major offensive against rebels in Homs in a renewed bid to secure an axis linking Damascus to the Mediterranean.

Activists said jets and mortar bombs pounded rebel-held areas of the city, which have been under siege by President Bashar al-Assad’s troops for a year, and soldiers fought battles with rebel fighters in several districts.

“Government forces are trying to storm from all fronts,” an activist using the name Abu Mohammad told the Reuters news agency on Saturday.

There were no immediate details of casualties but video uploaded by activists showed heavy explosions and clouds of smoke rising from what they said were rebel districts. Loud, concentrated bursts of gunfire could also be heard.

The attack on Homs city comes after gains made by Assad forces in provincial Homs villages and towns close to the Lebanese border. They have been supported by Hezbollah fighters, a support which is brewing crisis in neighbouring Lebanon, home of the Hezbollah.

Three weeks ago Hezbollah aided the recapture of the border town of Qusayr, a former rebel bridgehead for guns and fighters smuggled into Syria, and last week secured another border town, Tel Kalakh.

Those gains have consolidated Assad’s control of a corridor of territory which runs from Damascus, through Homs, and to the traditional heartland of Assad’s minority Alawite sect in the mountains overlooking the Mediterranean.

The rebel setbacks have also motivated rebel allies abroad to increase their support, with Saudi Arabia reported to have fast-tracked heavy weapons shipments into Syria to combat regime armour.

Despite losing ground around Damascus and Homs, rebels registered a symbolic victory on Friday when they overran a major military checkpoint in Deraa, the southern city where the uprising first erupted.

Rami Abdulrahman, the head of the Syrian Observatory for Human Rights, said the fall of the army post was strategically significant and could change the balance of power in Deraa, where rebels control most of the old city.

The province of Deraa, on the border with Jordan, has been a conduit for rebel arms supplies.