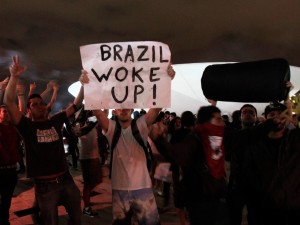 Scattered street demonstrations popped up around Brazil for a third day as protesters continued their collective cry against the low-quality public services they receive in exchange for high taxes and high prices, as FIFA Confederations Cup continues in the South American country.

Brazil’s government deployed special federal police on Wednesday to the five of the six cities where the Confederations Cup football tournament is being played to protect the competition’s venues.

The government reaction is notable given that the Confederations Cup is seen as a dry run for the World Cup next year.

The National Force, composed of police and firefighters from different states that are called up for duty on special occasions, is a “conciliatory, mediating” force, “not repressive,” the Justice Ministry said. 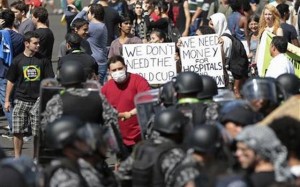 Protest organisers said new mass demonstrations will be held in Sao Paulo and Rio de Janeiro on Thursday. In Rio, protesters plan to march to Maracana stadium where Spain and Tahiti meet in a Confederations Cup match.

On Tuesday, tens of thousands of people have taken to the streets of several Brazilian cities for a second night of largely peaceful protests over poor public services, high prices and corruption.

In Sao Paulo, an estimated 50,000 people participated in Tuesday’s demonstration lasting hours and concentrated along Avenida Paulista in the centre of the city of 11 million, police said.

A vehicle belonging to a television station was set on fire in front of the mayor’s office. Windows of the building had earlier been smashed by rioters, and police withdrew into the building.

Thousands of people also demonstrated in Sao Goncalo near Rio de Janeiro, as well as in Belo Horizonte where the Super Eagles of Nigeria played their first match against Tahiti, amid a large police presence.

Protests a day earlier saw an estimated 200,000 people in the streets across the country, around half of them in its second-largest city of Rio de Janeiro.

The unrest first broke out in Sao Paolo last week against an increase in public-transport prices.

The target of the protests quickly widened to include corruption and excessive government spending on hosting football tournaments instead of on health, education and other public services.

The protests have continued to escalate despite President Dilma Rousseff acknowledging the need for better public services and more responsive governance.

“The massive size of yesterday’s protests prove the energy of our democracy, the force of the voice of the street and the civility of our population,” she said.

“My government hears the voices clamouring for change, my government is committed to social transformation,” she said.

The demonstrators are demanding more from their government and are angry that billions of dollars in public funds are being spent to host the World Cup and Olympics while few improvements are made on infrastructure elsewhere.

The office of the United Nations’ High Commissioner for Human Rights urged the Brazilian authorities on Tuesday to exercise restraint in dealing with the protests and called on demonstrators not to resort to violence in pursuit of their demands.
The UN body said it welcomed the statement by Rousseff that peaceful demonstrations were legitimate.

A survey by the Datafolha polling agency suggested a large majority of participants at the Sao Paulo protest on Monday night had no affiliation with any political party and nearly three-quarters were taking part in the protests for the first time.

The protests are taking place not only during the Confederations Cup but just one month before a papal visit, a year before the World Cup and three years before the 2016 Olympics in Rio de Janeiro, events sure to shine the spotlight on the grievances of protesters.

The unrest is raising security concerns and renewed questions over Brazil’s readiness to host the mega-events.