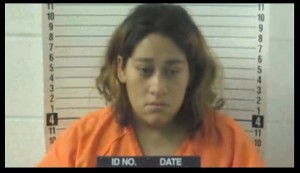 A 29-year-old Idaho mother told authorities she panicked when her toddler died hours after a fatal head injury last August.

Veronica Herrera described how her 2-year-old, Nakita, leapt from a potty chair during training and struck her head on a nearby heater. Afterwards, Herrera placed the girl into a playpen for a nap, instructed her 9-year-old son to babysit the toddler, and left the home for several hours.

When she returned, Herrera found the girl unresponsive, not breathing, and with a large bump on her head, according to KTVB.

Court records indicate Nakita’s mother admitted to placing the child’s body into a van and purchasing lighter fluid. Fearful her other children would be taken from her custody Herrera attempted to incinerate the body over several days.

In hopes no one would ever find little Nakita, the toddler’s body was placed into a barrel and set ablaze. Two of her siblings periodically fed the flames with garbage.

Consumed with guilt and at the urging of her own parents, Herrera approached an officer and confessed her crimes, saying something bad had happened and that she’d made it worse. The officer at the Nampa Police Department who met with Herrera described her as crying hysterically as she struggled to explain what happened to her daughter.

Initially, charges of first-degree murder and willful destruction of evidence were levied again Herrera, but she later pled out to six felony counts including involuntary manslaughter, failure to report a death, destroying evidence, and three counts of injury to a child – which included having the other children participate in tampering with evidence.

Authorities admit it would have otherwise been difficult to charge the woman with murder beyond a reasonable doubt, seeing as how the evidence had been damaged and the body burned into charred, skeletal remains. Therefore, she was given the option of a plea deal in lieu of a trial.

Herrera remains in custody on $500,000 bond, and sentencing is scheduled for July 25. Prosecutors are seeking 15 to 40 years in prison.