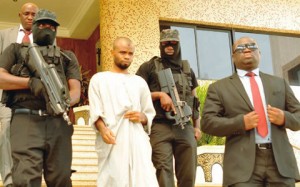 The Abuja Division of the Federal High Court, Friday, held that Kabiru Umar, a.k.a Kabiru Sokoto, the alleged mastermind of the Christmas day bombing that killed about 44 persons and wounded 75 others at St. Theresa’s Catholic Church, Madalla, Niger State, in 2011, has a criminal case to answer.

Sokoto had through his lawyers filed a no-case application which Justice Adeniyi Ademola, has now dismissed, and has also ordered him to produce his witnesses in court on July 5, with a view to establishing his innocence to the terrorism charge against him.

Ademola said he was satisfied that going by the totality of the proof of evidence before the court, the government, had successfully established a criminal case which would warrant further explanation by the accused person.

Sokoto who is answering a two-count charge against him by the government had through his team of lawyers led by Mr. Hassan Lukman, maintained that the government failed to establish a prima-facie case capable of warranting his trial and conviction.

While praying the court to discharge and acquit him, the accused person, Lukman contended that none of the six witnesses that testified against him in court was able to establish a nexus linking him to the alleged terrorist act.

Sokoto further queried the propriety of allowing him to undergo trial “in view of the fact that the prosecution has failed to tender any evidence connecting him to the alleged offence.”