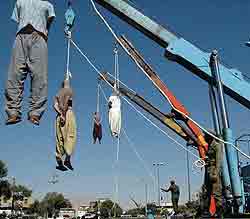 The Attorney General and Commissioner for Justice of Edo State, noted that the Nigerian judiciary had heard the cases of the convicts and found them guilty accordingly, and so he found it hard to understand why the government is being faulted.

He said that one of the death row prisoners, Thank God Ebos was not executed on Monday with others because the court held that he would die by firing squad, which according to him, the prison officials said would be done on a later date.

Idahagbon said it was laughable that Governor Adams Oshiomhole of Edo State was being blamed for the deaths of the death row inmates, just because “he only signed the death sentence of two after they were convicted, as the former governor of the state signed two earlier.

“The truth is that once there is a conviction, governors are now under a legal duty to sign their execution warrant and the prisons under a duty to execute it. If the governor does not sign, somebody can go to court to ask for an order of mandamus to compel the governor to do his legal duties. The governor merely performed his duties as governor. What the governor has done is 100 per cent in tandem with the law.

“But let us ask Amnesty International, if a man were to rob a woman in Texas, rape and then killed her by insertion of bottle into her private part, what would be the punishment in Texas? It will be death sentence. Yes, we know that the United Kingdom had abolished death sentence but it still exist in some states in the United States.”