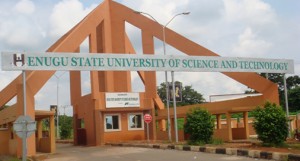 The Governing Council of Enugu State University of Science and Technology, ESUT, Wednesday, terminated the appointment of five staff of the university for alleged alteration of students’ grades.

A statement by the Director, Public Relations of the institution, Mr. Ossy Ugwuoti, said the four lecturers and the staff who is a computer operator, were from the department of Computer Engineering of the university.

Ugwuoti said one of the sanctioned lecturers (names withheld), who had served as Head of the Department of Computer Engineering, had engaged the others in the alteration of the grades submitted to him by lecturers during the computation of final year results.

Ugwuoti recalled that ESUT Governing Council had at its 129th meeting, warned that severe disciplinary action would be meted out to any staff of the university involved in any form of academic fraud.

The disciplinary action against the affected staff was said to be part of efforts to sanitize the institution of corrupt staff whose activities had negatively affected its image.[Vanguard]