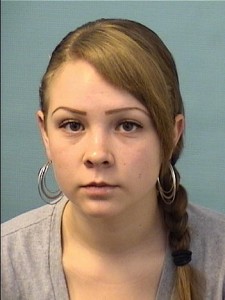 A teenager was arrested after she tried to blackmail a man into giving her money every week or face jail for r*pe, USA.

The teenager was trying to buy herself a sugar daddy by threatening to file rape charges if he refused to pay.

Selena Velasquez, 17, of Albuquerque, New Mexico, has been arrested after she had consensual sex with a 43-year-old man, and then threatened to file rape charges if he did not hand over $500 per week.

According to state police, Velasquez was at a Cinco de Mayo party in Pecos, where she met the 43-year-old man, and had consensual sex with him.

After the meeting, Velasquez told the man that she would report the encounter as rape if he did not pay her $500 every Friday for at least three consecutive weeks.

Investigators said that Velasquez made ​​matters worse by going over to the man’s job uninvited and was sending him threatening messages via text. She allegedly threatened to hurt him and his daughter.

“I am not justifying what the girl did, but come on, why would a young teenager agree to sleep with an older man if not for his money?

A 47-year-old man has no business sleeping with a young girl in the first place. He should look for someone closer to his age,” Sharon Olson, 46, a mother of two teenagers said.

The man reported the blackmail to police. Investigators told the victim to call Velasquez and agree to her demands, while they monitored the call.

Velasquez agreed to meet the victim at a local Walmart, where he was to make the first $500 payment. When Valesquez accepted the envelope, officers swooped in and arrested her.

During questioning, Valesquez allegedly admitted to having consensual sex with the man. She was taken to jail soon after.

She was incarcerated in the Juvenile Detention Center of Santa Fe County and charged with felony extortion. The man was not charged in the case, as the age of consent in New Mexico is 16-years-old