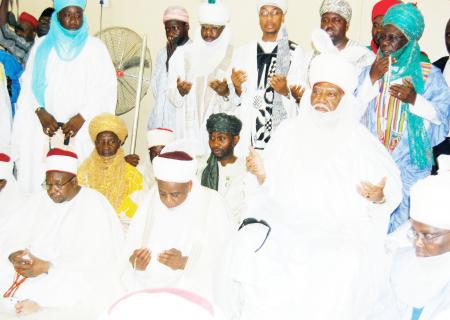 Five months after a bloody attack on his motorcade by suspected insurgents, the Emir of Kano, Alhaji Ado Bayero, has declared that nothing frightens him.

No fewer than three palace aides were killed in the January 19 attack while the emir and two of his sons who sustained injuries were flown abroad for treatment.

Speaking in a rare interview in the palace on Thursday night, Alhaji Bayero said: “In fact,I don’t even know what shock is.”

He was responding to a question on if he had ever been in a state of shock or frightened by anything to which he responded: “What do you mean by shock? In fact, I don’t even know what shock is. What I believe is that whatever happens to me on this earth is destined to happen to me by Almighty Allah.

“So there is no point in showing any fear, as whatever happens to any person is already pre-destined to happen to him. Therefore, wherever such things happen, whether good or bad, what is required from that person is to thank Allah; if it is for good, exercise patience.”

The interview was to mark the emir’s 50th anniversary on the throne.

He praised Allah for his long reign, saying: “I have nothing much to say than to thank Allah for sparing my life to witness these years on the throne as the longest serving Emir of Kano. It is not by my doing. It is through the help of Allah that I was able to have a good and understanding relationship with all the governors that governed the state during my reign.

“Alhamdulillah, all praises are due to Allah who, through all assistance, made it possible for me to witness these years on the throne, a feat that none of my predecessors achieved.

“I thank all the people of Kano and the country at large for showing me great love during this time and to have succeeded despite challenges because as I always say whoever puts his trust in Allah and follow instruction as prescribed by Islam in whatever he does, that person has nothing to worry about. So it is through Allah’s assistance that we succeeded all these years.”

The special Juma’at service in Kano was witnessed by thousands of well wishers from near and far.