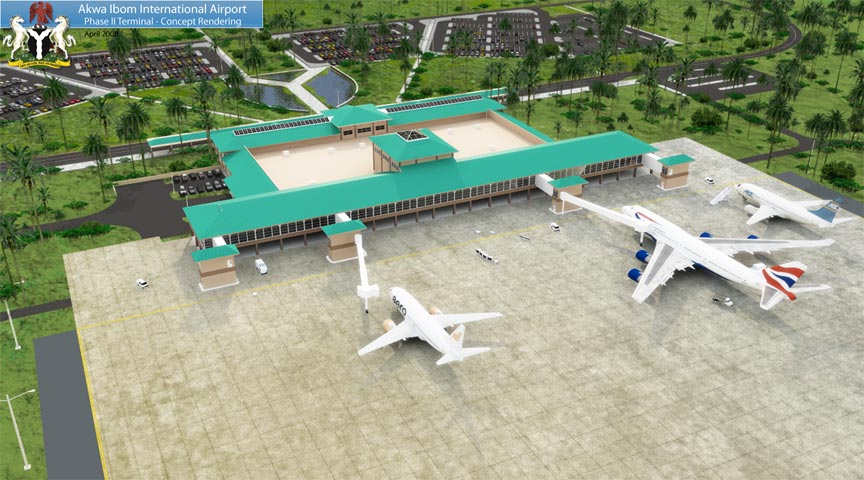 Akpabio announced the embargo during a town hall meeting with members of staff of the IADCL in Uyo on Monday.

He said the aim of establishing the airport had not been achieved since most of the facilities were still under construction.

The meeting was called to address the welfare of the airport workers/the National Union of Air Transport Employees (NUATE) and Air Transport Services Senior Staff Association of Nigeria (ATSSSAN).

According to him, “the airport is meant to render repair and maintenance operations within the region.

“Due to the stress being experienced by the teeming population of Akwa Ibom by going to Calabar to board planes; we have to commence passengers airlifting from the Uyo airport.

“We are yet to decide other services that will be operational as we are currently on expansion to accommodate international services.

“We are constructing a fuel dump and other facilities that are inherent in a world class airport.

“Most of the staff members are redundant because we are still constructing the facilities they are supposed to work with; so we cannot continue to employ until we are through.

“In the interim, we have to rationalise some of the staff to other agencies within the state civil service until we achieve the full aim of the airport.”

He approved N120million for the payment of salary arrears owed the airport staff and recalled one who was wrongfully dismissed.

Akpabio also said the staff would be incorporated into the state civil service.

He explained this was a step toward addressing the poor welfare and enhance their opportunities in case the airport was taking over by the Federal Government.

The governor promised to set up a committee to look into the issues of rationalisation of the staff, promotion and increment of salaries in accordance with the state civil service rules.

Chairman of ATSSSAN, Brendan Edidiong, appealed for the upward review of IADCL staff salaries to become 10 per cent higher than that of Federal Airport Authority of Nigeria (FAAN).

Edidiong also appealed for the release of promotion letters to the overdue staff of IADCL with financial benefits effective from the day they were due for promotion.

Chairman of Ibom Airport Implementation Committee, retired Air Commodore Idongesit Nkanga, urged the workers to abide by the rules of safety and security as prescribed by the aviation authorities. (NAN)