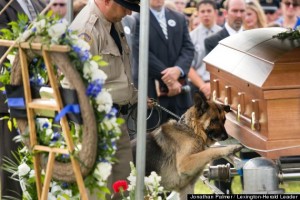 An emotional photo from the funeral of Kentucky K9 officer Jason Ellis is proof of the incredible bond between police dogs and their human partners.

The 33-year-old officer was killed in a suspected ambush on Saturday and laid to rest soon after, according to the Lexington Herald-Leader. Ellis’ canine partner, Figo, who worked with him to find drugs and illegal substances, kept a vigil beside his casket.

The image was posted to Reddit, where it immediately became popular.

“Dogs can actually smell when someone or something is dead and it gives them closure. Not sure if he can tell it’s him through the coffin, but he should,” wrote Redditor Link_GR.

A cat from a Rhode Island nursing home is said to have been drawn to patients who were soon going to die.

Police Chief Rick McCubbin told the Associated Press that Figo and Ellis were “true partners.” The police dog has been retired and will live with Ellis’ family.