Home National News Odd News How This Woman Was Beaten And Thrown Off Plane For Not Switching...
Facebook
Twitter
WhatsApp 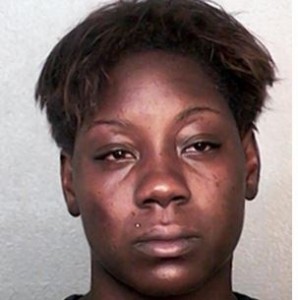 A hysterical passenger was dragged off a North Carolina-bound U.S. Airways flight on Sunday after she ignored orders to put her cellphone away and cursed at TSA agents.

Lindsay Capri Bien-Aime, 21, unleashed a foul-mouthed tirade on agents and attendants in front of her toddler son after they tried to escort her off the plane at Fort Lauderdale airport, WCNC reported.

A passenger a few rows in front of Bien-Aime recorded the incident on her cellphone.

Video posted to YouTube and LiveLeak shows the agents warning Bien-Aime she’ll go to jail unless she gets off the plane, but Bien-Aime refuses.

Lindsay Capri Bien-Aime was charged with battery on a law enforcement officer.

Eventually, the officers get physical and handcuff her.

One local station reported that she bit one of the deputies.

The Charlotte-bound U.S. Airways flight was delayed for 45 minutes.

Bien-Aime was charged with battery on a law enforcement officer, disorderly conduct and resisting arrest.