Home Politics IBB Has Been A Pillar Of Support For The Abiola Family, He...
Facebook
Twitter
WhatsApp

It’s been twenty years since the annulment of the June 12, 1993 presidential elections presumably won by late Chief M.K.O Abiola, but the memories of the annulment and subsequent death of the business tycoon remain fresh in the hearts of many Nigerians.

Speaking yesterday in commemoration of the annulled June 12 election, Head of Abiola family, Mubashiru, exonerated former Military President, General Ibrahim Badamasi Babangida, whom many believed was responsible for Abiola’s death, from complicity in the actions that led to the death of MKO in government’s custody. Rather, he said that Babangida, who annulled the election, had been a pillar of support to the Abiola family since the business mogul died in detention on July 7, 1998.

In an interview with newsmen in Abeokuta, Mubashiru who appealed to the Federal Government to pay the debt owed Abiola, said Babangida‘s support to the Abiola family was unparalleled after the death of their bread winner, saying, the family believed strongly that, it was not possible for the General to kill his former friend.

“Babangida did anything we wanted in this family. Unless he did not know, he would come. He has been supporting this family. He always supports the family. There was a time Abiola’s daughter was wedding, Babangida was here with his wife right away from Minna, sat down with us; he left his wife to stay with us till the second day. She slept in M.K.O.’s house till the second day.

“That is the major reason why I will always support him and I don’t believe that Babangida was the one that killed M.K.O., no. That is capital no. Everybody knew that Babangida was not in the government when M.K.O. died. How could you say that somebody who was not there did something? It is not possible. Babangida does not know anything about the death of M.K.O.”

Delivering a speech on behalf of the family, Mubashiru described IBB’s regime as the best urging current governments at all levels to embrace the vision of June 12 by ensuring good governance.

“I want to state unequivocally that General Babangida’s administration remains the best ever in the nation’s history and I implore our current administrators at various levels of governance to embrace the vision of June 12, by ensuring that every Nigerian family gets food on their table and shelters on their heads, all employable youths get jobs while the nooks and crannies of the Federation enjoy basic amenities.”

Appealing to the Federal Government to pay the money it owes the Abiola family, he said: “I also want to thank the President Goodluck Jonathan, for what the Federal Government ought to have done for the family, but was yet to be done. I take advantage of today’s 20th anniversary of June 12, to request President Jonathan to invite Abiola’s family to a meeting to deliberate on how the Federal Government intends to settle the long standing debts owed that political icon, business mogul and symbol of our modern day democracy.” 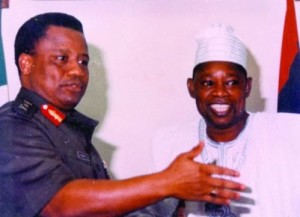 Also speaking on the June 12 anniversary, President Goodluck Jonathan said that ‘June 12’ had changed the history of the country for good.

Jonathan said the Federal Government was ready to immortalise Abiola for his role in the country’s democracy. He therefore urged Nigerians to come up with suggestions on how best to honour the late politician. The government’s effort to name the University of Lagos after Abiola last year hit a brick wall with opposition from stakeholders and students of the institution.

Speaking shortly after inaugurating the chairman and members of the re-constituted Police Service Commission, President Jonathan said June 12 was a unique day in the nation. He said although the Federal Government was yet to recognize the day as a public holiday, some state governments had done so. There have been calls from prominent Nigerians urging the Federal Government to recognize June 12 as the nation’s Democracy Day as against May 29.

At Democracy Audit organized by the Save Nigeria Group (SNG) at Sheraton Hotel, Lagos to mark June 12, Convener of the group, Dr Tunde Bakare, said since the historic election, Nigeria had remained impoverished and the problems Abiola promised to tackle remain unsolved.

He spoke as Information Minister, Labaran Maku, who attended the event countered that some improvement even though little had been made and said the government was ready to immortalize Abiola.

In a speech entitled: “From Hope ‘93 to 2013: How Far Has Democracy Brought Nigeria?” Bakare said though some gains like freedom of speech had been recorded, they were not enough as the problems of poverty and flawed elections among others persist.

He urged the government to immortalise Abiola by naming edifices like the National Stadium after him.

“The 1993 MKO Abiola vs. Bashir Tofa election, conducted exactly 20 years ago today, is popularly termed the freest and fairest in the history of Nigeria. It was Nigeria’s first taste of a renascent democracy after so many years of military rule, coups and counter-coups. It was an election whose callous annulment shook the nation. Since then, the country has witnessed a lot of changes – for better, and for worse. However, none of those occurrences have left the country exactly the same.”

Also speaking as Nigeria commemorates the 20th anniversary of the June 12 elections annulment, son of the late M.K.O Abiola, Kola Abiola, faulted FG’s stance that the privatization of Nigeria’s power sector was key to stable power supply in the country.

Kola Abiola said, “The idea of privatizing power is not a good idea for Nigeria. If power is privatized, how can the 90 per cent and 70 per cent of Nigerians who live below $2 and $1 per day respectively, afford it? It will only be meant for the rich,” insisting that government must guarantee the citizen some basic things before privatization”.