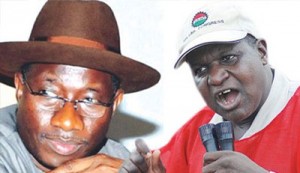 In a statement by the NLC President, Abdulwaheed Omar, the presidency’s tactics was described as crude, cheap and barbaric, and a throw-back to the days of military dictatorship, which Nigeria was better off without.

“NLC wishes to condemn in strong terms the unjustifiable delay, frustration and eventual grounding by aviation authorities in Benin of the helicopter billed to convey Governor Adams Oshiomhole of Edo State to the burial ceremony of the wife of Senator Ben Obi in Anambra State, last Friday.

“All too often in recent times, federal institutions have been willing tools in the hands of vindictive politicians or appointees out to settle scores. Yet, strong institutions are key to deepening democracy.

“The first victim was Governor Rotimi Amaechi of Rivers State, whose plane still remains grounded to teach him a lesson for insisting on, and indeed contesting, the chairmanship of Nigeria’s Governors Forum.

“In spite of spirited efforts at official explanations, which normally come as afterthoughts, not a few believe these are acts executed at the behest of or to please the presidency.

“Interestingly, the presidency has done little to disguise its interest. Congress is dismayed by these familiar but reprehensible styles of dealing with governors with dissenting views.

“We find these tactics crude, cheap and barbaric, and a throw-back to the days of military dictatorship, which we are better off without. We find it amazing that pilots of considerable experience with hundreds of flying hours in Nigeria will suddenly be bereft of elementary rules governing flight operations.

“And supposing they had been operating in ignorance or in breach of extant regulations, we are yet to see the sanctions meted out to those institutions or individuals that aided or abetted their conduct.

“We have noticed with concern the growing sensitivity of the presidency to criticism and the penchant to treat every thought, opinion or action that does not conform as a treasonable offence.

“May we remind the presidency and its army of aides, sidekicks and others in the service, that democracy thrives on time-honoured principles of freedom of speech, association and accountability. Not on impunity or brutality.

“We would want to call for caution on the part of all players or stakeholders. Democracy without alternative viewpoints is not democracy.

“The earlier we accept and live with this the better for all of us. We ought to be sufficiently matured enough not to practice herd culture in the 21st century,” the statement said.