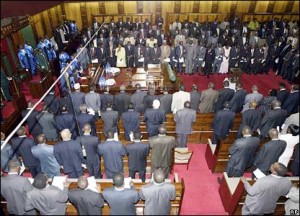 Kenya’s members of parliament have finally come to an agreement over their new salary, local media says.

Parliamentarians on Tuesday agreed with the Salaries and Remuneration Commission (SRC) and the Parliamentary Service Commission (PSC) to a gross monthly salary of $6300 after a deadlock in negotiations prompted several public protests against the elected politicians, including one where protesters brought pigs to the parliament house.

They will also get a $59,500 car grant and tax free mileage allowance and a pension as per a contributory scheme.

The SRC had said the benefits were subject to the availability of funds, local media reported.

The MPs had initially wanted their salaries revised to around $10,000 per month, drawing criticism across the country.

The teachers, the police, the doctors, the nurses are poorly paid … but the MPs don’t think about those issues

Earlier on Tuesday, hundreds of ‘Occupy Parliament’ protesters blocked the entrance to parliament during demonstrations to condemn legislators’ push for higher salaries.

Dozens of police armed with batons and tear gas were deployed around the parliament in the centre of Nairobi, but the event passed peacefully.

“Kenyans are not willing to pay for the rise,” said one of the demonstration’s organisers, Florence Kanyua.

“The teachers, the police, the doctors, the nurses are poorly paid … but the MPs don’t think about those issues.”

“The economy of this country cannot afford it,” said Khelef Khalifa, chairman of the Muslims for Human Rights Organisation.

The Salaries and Remuneration Commission has argued that although Kenya was among the world’s poorer economies, its legislators were earning more than those in France.

When Kenyatta opened parliament in mid-April, he told legislators that the bill for government salaries came to 12 percent of GDP, above the internationally accepted level of 7 percent.

Kenyatta also urged the MPs to develop the economy before they demand higher salaries.