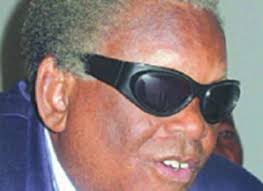 The late Apostle Timothy Obadare would be buried in a gold-plated casket as a mark of honour for his contributions to Christendom, his first son, Pastor Paul Obadare has disclosed.

The late apostle and founder of World Soul Winning Evangelical Ministry died after a protracted illness at the age of 85 last March in Akure, the Ondo state capital.

A cursory check online shows that these celebrities were buried in Batesville-promethean caskets made of solid bronze but is 14-carat gold-plated, with a hand-polished mirror finish and a velvet interior which cost between $25,000 and $30,000.

But Paul, who is the General Overseer of the church in the United States of America, said his father deserved to be so honoured.

He described his father as a national figure, who made lasting impact on the nation in his time.

He listed other events lined up for the burial of the renowned blind evangelist to include an exhibition of snapshots of crusade documentaries with a lying-in-state in Ilesha, Osun State in a transparent ambulance.

“Our father was a renowned teacher of the bible, a great missionary, crusader and devoted apostle of Jesus Christ. He lived a well-fulfilled exemplary life of a good Christian” he said.

“He served man and God before his passing. We the children, biological and spiritual, have come together to give him a deserving burial as a national figure.

“There will be service of songs in Ilesha, Akure, Ibadan and Lagos, while he will be interred at a mausoleum prepared for his final rest at WOSEM conference ground at Ilesha-Ife, in Osun State,” he added.