Home National News Odd News Man Banned From Bar For Having ‘I Love Strippers’ Tattoo On His...
Facebook
Twitter
WhatsApp 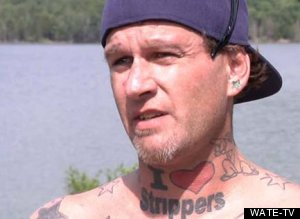 Mike McKeown’s message is simple: “I love strippers” — and the 43-year-old man from Tennessee believes in it so much, he has it tattooed on his neck.

McKeown was recently banned from Bubba Brew’s, a floating sports pub on the shores of Norris Lake. The owner deemed his tattoos offensive.

Now McKeown is mad as hell and wants justice.

“This is a little tiny Bible belt town that some people think they control,” McKeown told The Huffington Post. “Bubba Brew’s is the only place allowed to serve hard alcohol in a 30-minute radius.”

The bar is casual, with patrons mostly in bathing suits and flip flops, yet something about McKeown’s tats flipped off Bubba Brew’s owner Ned Bass.

“There were some kids trying to figure out what he had written all over his body. You know, it’s real simple. We pay the mortgage, we pay the insurance, we’re going to make the rules,” Bass, who has several tattoos himself, told WATE-TV.

“In a family-oriented establishment, you can’t have the obscenities he has on his body. That’s free speech. He can go to the beach, but he can’t come to Bubba Brew’s.”

McKeown runs a medical marijuana business in Washington State, when he’s not visiting his mom in Maynardville. He believes Bass isn’t being fair, especially since he has patronized the bar shirtless several times over the last three years and never been harrassed previously.

“If he felt it was wrong, he could have pulled me aside and asked me to put on a shirt,” McKeown told HuffPost. “He looked
at me like I had a disease. The place has lax rules. It’s a beach environment. If you ban one guy with tattoos, then ban them all.

“I’ve seen people who, frankly, shouldn’t be in bathing suits at all and even Nazi tattoos there,” McKeown said. “The owner tries to make it seem like a family place, but how many family establishments have doormen checking ID’s?”

Bass was unavailable to comment on McKeown’s allegations, claiming a busy weekend.

Meanwhile, McKeown is weighing his options or if he even has any.

“I don’t know my options, but I want to expose this. It’s wrong,” he said. “I don’t mind putting a shirt on, but make the others do it too.”