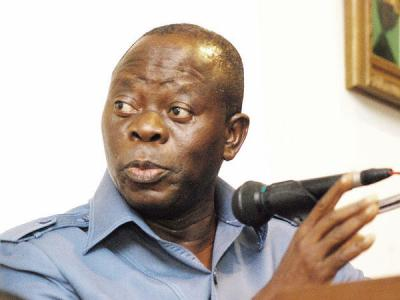 The Nigeria Airspace Management Agency (NAMA) yesterday reiterated its position that the pilot of OAS Helicopter carrying Governor Adams Oshiomhole of Edo State en-route Anambra on Friday, was ordered to return back to Benin because he failed to comply with regulatory procedures.

Briefing journalists in Lagos yesterday, the General Manager, Public Affairs of NAMA, Mr Supo Atobatele said, “The pilot of the helicopter should be held responsible for the incident, for his failure to comply with a mandatory operational directive issued by NAMA since April that all pilots must submit a flight plan and file passenger manifest before any flight.”

According to him, the incident had nothing to do with politics, but was purely an aviation matter bordering on rules and regulations even though the pilot reportedly said that he was threatened after making payment that the aircraft would be grounded completely if he argued with them; a situation which implied a political undertone.

Atobatele said, “We want to be emphatic with our declaration this afternoon that the safety and security related issues raised by our men on Friday at Benin Airport is about a flight plan and passenger manifest.

“Basically, as matter of rules, we need to know where the aircraft was going and how many people were on board.

“NAMA by statute is covered by legislation to demand for all this. But the pilot or his employer failed to comply with this simple procedure. It’s a globally acceptable procedure for a pilot to file his flight plan and declare his passenger manifest before getting a start up.”

He added, “When this is done, there will be delays while perfecting your documentation at a point of departure. It was a minor issue that should not be given political colour action as being portrayed now.

“NAMA is never political in discharging its duties,” he empahised just as he noted that NAMA is safety driven and does not respect status.

Also speaking at the briefing, the coordinating spokesman of aviation agencies, Mr Yakubu Dati said, “The chopper was never grounded as being alleged in some quarters, but the pilot was requested to lift the chopper from Government House in Benin to the airport to carry out the mandatory safety requirements.”