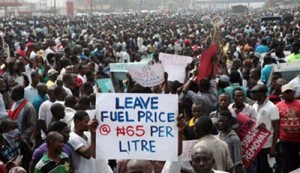 Four protesters who were shot by the dismissed Divisional Police Officer of Pen Cinema Police Station, Agege, Lagos, Mr. Segun Fabunmi, during the protests against fuel subsidy removal in January 2012 have been awarded N4m as compensation by a Lagos High Court, Ikeja on Friday.

In her judgment, Justice Bola Okikiolu-Ighile, who saw the shooting as reckless awarded N4m damages against the police and Fabunmi for “recklessly shooting and inflicting bodily injuries” on the protesters.

She also ordered that the police apologise to the applicants in two national dailies, including The Punch newspaper.

Okikiolu-Ighile, scaled down the N100m, which each of the four applicants had originally prayed for to N1m.

She held that the shooting violated the protesters’ constitutional rights to freedom of movement and human dignity.

The court exonerated the Attorney-General of the Federation, Mr. Mohammed Adoke, though she first dismissed the preliminary objection he had instituted against the suit.

She said both the first and second defendants (the police and Fabunmi) “wilfully and deliberately refused to participate in the proceedings,” thereby rendering all the allegations of the applicants against them unchallenged.

She said, “In the absence of any counter-affidavit or any opposition, the court is bound to evaluate the facts placed before it and determine the case based on the facts.

“The applicants averred that the second respondent, who they identified as a policeman, took a gun from another policeman and shot at them. This fact was not challenged by the first and second defendants and it is thereby deemed accepted.”

She added that the medical reports obtained by the applicants from the Lagos State University Teaching Hospital were satisfactory, linking the injuries on them to gunshots.

She said, “I hereby declare that the first and second respondents recklessly and maliciously shot at the applicants inflicting bodily injury in violation of their right to life, right to freedom of movement and right to human dignity.

“It is hereby ordered that the first and second respondents offer apology to the applicants on The PUNCH newspaper and one other national newspaper.

On January 9, 2012, Fabumi, a Chief Superintendent of Police before his dismissal, was said to have shot at the protesters about 9.30 am at Yaya-Abatan Junction, Agege, Lagos.

The four applicants were said to have been injured while one other protester, Adedamola Daramola (Aderinto), died instantly.

The fundamental human rights enforcement suit dated March 13, 2012, was instituted on behalf of the four applicants by the Director, Lagos State Office of the Public Defender, Mrs. Omotola Rotimi.

Apart from his involvement in Friday’s judgment, Fabunmi faces a criminal trial with proceedings said to have commenced on the same day. He is being prosecuted before Justice Olabisi Akinlade of the same Lagos High Court, for murder, attempted murder and causing of grievous bodily injury.