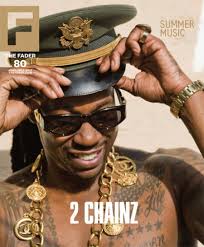 Rapper 2 Chainz was reportedly robbed this weekend in California.

TMZ reports 2 Chainz was robbed at gunpoint in San Francisco at about 4:30 p.m. on Sunday.

Surveillance video appears to show that the rapper, who had his wallet stolen, was the intended target, according to TMZ. His entourage reportedly “ran away from the incident like ‘cockroaches running from a flashlight.'” Police are currently looking for a suspect.

Bay Area news network KTVU reported 2 Chainz was robbed while outside of a local marijuana dispensary.

Rumors surrounding the alleged incident flooded the Internet on Sunday. Some even claimed 2 Chainz had been shot multiple times. That gossip proved false when the rapper took to the Oracle Arena stage in Oakland that evening for the 106 KMEL Summer Jam concert apparently uninjured.