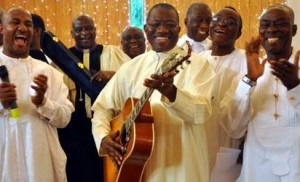 President Goodluck Jonathan has urged state governors to continue signing death sentences passed on convicted criminals, saying that as leaders, their responsibilities include doing both the “sweet and the ugly part” as long as it is sanctioned by law.

Speaking, yesterday, at the Villa Chapel to commemorate the Fathers’ day celebration, president Jonathan expressed worry that discipline which used to be the hallmark of the family is gradually degrading because of negative influence of modernism.

“In the case of capital punishment, the state governors will sign (the death sentence). Even governors sometimes find it difficult to sign. I have been telling the governors that they must sign because that is the law. The work we are doing have a very sweet part and a very ugly part and we must perform both. No matter how painful it is, it is part of their responsibilities” the president said.

The president said fathers are expected to be role models, and they must not fail to discipline their children when necessary.

“I want to urge all of us who are fathers to discipline our children. No matter what you do, even if you show love and provide the needs of the family, if you don’t discipline your children, it is not good. So for us as parents, it is important for us to let our children constantly know that it is good to take the right path. It is good for them to know that they must be upright” the president said.

Present at the special service were the Delta State governor Emmanuel Uduaghan who was the special guest of honour, President’s mother, Eunice Jonathan; Governor Godswill Akpabio of Akwa Ibom State; Deputy President of the Senate, Ike Ekweremadu, and his wife; Chairman of the Board of Trustees, Peoples Democratic Party, Chief Tony Anenih; members of the Federal Executive Council; new Controller-General of Immigration, Mr. David Paradang; Commandant-General of the Nigeria Security and Civil Defence Corps, Dr. Ade Abolurin; and members of the National Assembly.

Others were the Ambassador of Ireland in Nigeria, Mr. Patrick Fhearghail; the Israeli Ambassador to Nigeria, Mr. Uriel Palti; former House Leader, Tunde Akogun; Ndidi Elumelu, among others.