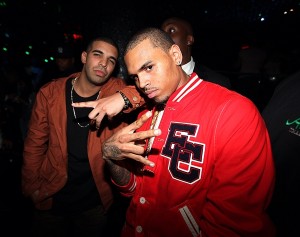 Drake seems to still be holding grudges against Chris Brown over his New York City club bust-up with the R&B singer last June, which lead to several other people been injured. The brawl resulted from both parties arguing about a common interest,  fellow musician Rihanna, which degenerated into bottle-throwing and fist punching fight between the two love rivals and their respective bodyguards.

One year after and Drake has spoken openly about the W.i.P nightclub incident for the first time, insisting he will never patch things up with the Chris Brown.

Referring to Chris’ on/off relationships with fellow singer Rihanna and model Karrueche Tran, Drake told America’s GQ magazine: ‘I hear he has everything he could want now. I don’t want my name to be synonymous with that guy’s name. I really don’t. I wish we could sit down … and talk it out man-to-man. But that’s not going to happen.’

Drake was said to have started the fight by sending Chris a bottle of champagne from across the bar with a note reading, ‘I’m f***ing the love of your life’ – insists he isn’t a confrontational person and was provoked by Chris.

He ranted: ‘I’m not confrontational, but if someone challenges, I’m not going to back down. It’s embarrassing, the amount of media coverage … Two rappers fighting over the woman’. ‘He’s not even a rapper, but still, it’s the last way you want your name out there. It distracts from the music. But he’s made me the enemy, and that’s the way it’s gonna stay, I guess.’

The ‘Successful’ rapper also said he worries for Rihanna if she should get back together with Chris, who was arrested for assaulting her in February 2009. He added: ‘If I think about it too much, I feel it wrapping around my foot, like I get a feeling it could end really badly. Like, it gets really dark.’