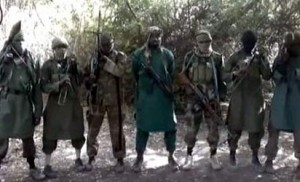 Gunmen suspected to be Boko Haram members last night killed a soldier and abducted three others during an attack on the military in Potiskum, Yobe state, a military source has revealed.

Confirming the incident to newsmen in Damaturu, the Yobe State capital, the source said the corpse of the deceased soldier had been brought from Potiskum and deposited at a hospital morgue in Damaturu.

“The attack was a bad one because a soldier was killed and the terrorists kidnapped three other soldiers to an unknown destination,” he said.

“Some of our search teams are combing within and outside the neighbourhoods of Potiskum for the missing soldiers. A helicopter gun ship had been deployed from Maiduguri to join in the search teams yesterday morning”.