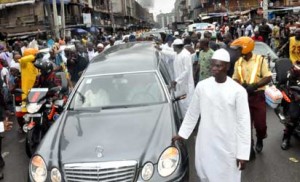 National leader of Action Congress of Nigeria, ACN, Asiwaju Bola Ahmed Tinubu, who recalled his mother’s last moments, said: “On Saturday afternoon, she had her lunch. After that, she took her drugs and rested.

“While resting, death came and snatched my mother away. Immediately she died, I felt her void. She taught everyone she came across contentment, love and the act of sharing, especially to the needy.

“I will miss her lunch even when I am full. I am very happy that she is my mother. She is a very successful mother and a good leader. She departed this world peacefully without taking us through pains.

“She is so kind and God was also kind to her. She is a good thinker and a compassionate person. She has left a very good legacy for everyone.

“She did something when I was the governor of Lagos State that really touched me and that was when she asked me to consider three women, who had challenges paying their children’s West African Examination Council, WAEC, fees.

“As a governor then, I began the policy of paying WAEC fee of pupils in Lagos State public schools. Those are the things that will fascinate anyone about my late mother.

“There are many lessons that women can learn from her. And one of the lessons is to be resilient, committed and industrious in order to help banish poverty in the country. She is a committed democrat.

“She believes in the one-man one-vote campaign. She will vote and mobilise others to do so. Women must also be committed to the education of their children, which is the antidote for poverty in the country. Once we come out of this, the nation will make progress.”

As early as 8:00am, the Alausa residence of Mogaji became a beehive of activities, as hundreds of party loyalists, relatives and friends to her children thronged her premises to pay their last respects.

The Fidau was conducted earlier in the day at the Central Mosque, Lagos Island, before she was buried at the Vaults and Garden Cemetery.

The corpse was brought into the Mosque at 11:24am, followed by a short sermon.

Alhaji Muritala Giwa, who delivered the sermon, urged Tinubu, Tambuwal, governors and the crowd at the Mosque, to always eschew violence and exhibit good attitude.

Giwa said: “As the late Iyaloja General of Lagos impacted positively on the life of people, everyone should emulate such act.”

The wives of the south-west governors, led by Dame Emmanuella Fashola, and chairmen of the 57 councils in the state were also there.