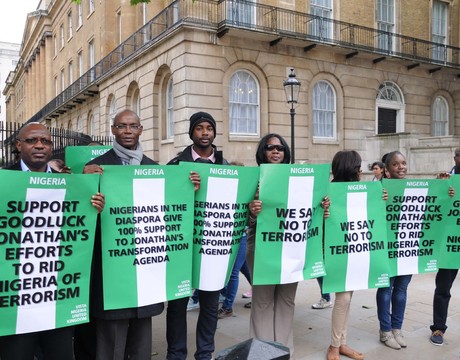 A U.K. based Nigerian group, VISTA International, on Thursday in London called for global support for President Goodluck Jonathan’s fight against terrorism in the country.

The group stated its position during a protest at No.10 Downing Street office of the British Prime Minister, David Cameron, and the Nigerian High Commission in London.

Members of the group who braved the windy spring weather carried placards some of which read “Support Goodluck Jonathan’s effort to rid Nigeria of terrorism”, “We say no to terrorism”, and “Stop conspiracy to destabilise Nigeria”.

The group’s publicity secretary, Yunana Shibkau, who spoke on the development, said that a letter calling for U.K.’s support had been sent to Cameron’s office. He stressed the need for both nations to be strategic partners in the fight against terror.

Mr. Shibkau noted sponsorship role played by forces behind the scenes, adding that some powerful Nigerians were funding groups like Boko Haram, and called on the youth to shun terrorism.

He condemned Boko Haram terrorists who are masquerading as Muslims when they are not in fact Muslims. He implored Nigerians to be wise to the whips and caprices of these cabals.

He said the acronym VISTA meant Vision, Integrity, Security, Transparency and Accountability, noting that the group among other functions canvasses for a strong national security network to guarantee the safety of all Nigerians.

The Chairman of the Ijaw National Congress, Europe chapter, Stephen Benamaisia, who took part in the protest, said “we are here to demonstrate our support for Jonathan’s administration and his fight against Boko Haram”.

Mr. Benamaisia, however, said it would require the collective effort of all Nigerians to curb the menace of terror posed by the sect.