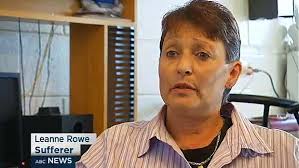 An Australian woman told yesterday how she woke from a serious car crash – with a French accent.

Leanne Rowe suffered a serious head injury in the smash eight years ago, which left her with a broken back and jaw.

The Tasmania-born mum has never been to France but now speaks with a strong French accent which she says had left anxious and depressed.

“Slowly, as my jaw started to heal, they said that I was slurring my words because I was on very powerful tablets,” she told the Australian Broadcasting Corporation last night.

As her speech began to improve, Leanne found the slurring started to sound like a French accent, which she has spoken with ever since.

The condition has left Leanne a virtual recluse and her daughter usually speaks for her in public.

“It makes me so angry because I am Australian,” she said. “I am not French (though) I do not have anything against the French people.

“I prefer night time because it is very peaceful, not many people about.”

Family doctor Robert Newton believes Leanne is only the second person ever in Australia to suffer from rare Foreign Accent Syndrome.

He told ABC: “She had a normal, if you like, Australian accent for the whole time I knew her before that.

“She’d done French at school but she’d never been to France, didn’t have any French friends at all.”

Around 60 people are thought to suffer from Foreign Accent Syndrome, which is linked to damage to the part of the brain that controls speech.

The first known case was recorded in 1907.

In 2010 a New Zealand woman with multiple sclerosis found her Kiwi tones turning into a mix of Welsh, Scottish and North London accents and a subsequent scan revealed two lesions on her brain.

Last year, Birmingham-born mum Debie Royston emerged from a gruelling bout of the flu with a French accent after suffering from a number of seizures.

And Englishman Alun Morgan, 81, woke from a stroke to find he spoke Welsh.