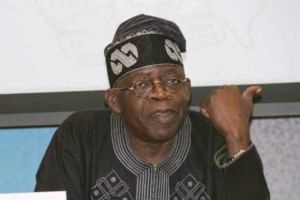 Following the death of his mother, former Governor of Lagos State, Asiwaju Bola Tinubu, has reportedly decided to impose his daughter, Shade Tinubu-Ojo, as the new leader of market women in the state.

People’s Democratic Party, PDP, in a statement on Monday by its Lagos Publicity Secretary, Taofik Gani, has therefore urged Tinubu to allow democracy prevail in the selection of a new leader.

“You should allow the simple tenets of democracy to prevail in the selection of a new leader for the market women, more so as there is no cogent evidence that the nominee is a full-time market woman,” the statement said.

The former governor had allegedly announced the choice during the eighth day Firdau prayer for his mother and former leader of Association of Market Women and Men of Nigeria, Alhaja Abibat Mogaji.

“The former governor plans to confirm this choice to market leaders at a meeting he has summoned for Tuesday (today) at his residence.

“This new development portends great danger for our democracy and indeed Lagos’ integrity. We are thus calling on Governor Babatunde Fashola not to sit on the fence at this auspicious time,” the statement read.