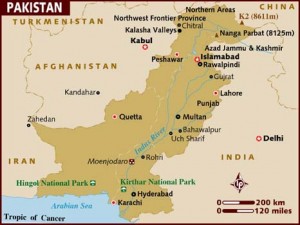 17 people have been killed, and many others wounded when a suspected US drone struck Pakistan’s restive border region, local security officials said.

Wednesday’s attack is the biggest this year and the second since Prime Minister Nawaz Sharif took office.

Most of those killed were fighters for the Haqqani network, according to three Taliban commanders and security officials.

Many were wounded in the attack, local tribesman Kaleemullah Dawar said, but rescuers delayed for fear of falling victim to a second attack, a common tactic with drone strikes.

“It was not possible for the people to start rescue work for some time, as the drones were still flying over the area,” Dawar said.

US officials consider the Haqqani network to be one of the most dangerous “militant” factions fighting American troops in neighbouring Afghanistan.

The drone attack was the biggest launched this year and the second since Sharif took office as prime minister following his victory in May elections.

A drone strike in May killed the Pakistani Taliban’s second-in-command and six others.

Sharif has called for an immediate end to US drone strikes on the grounds they breach of Pakistan’s sovereignty.

Washington views it as a vital tool in the fight against armed groups Taliban and Al-Qaeda, believed to be holed up in Pakistan’s lawless tribal areas.