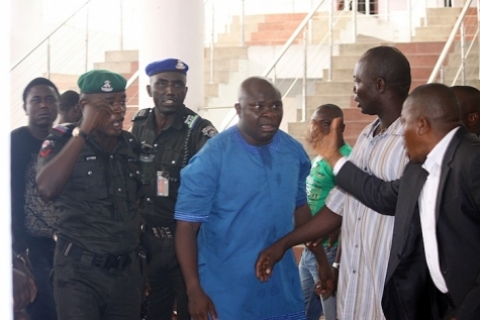 The crisis rocking the Rivers State House of Assembly is far from over as 27 members of the House loyal to Governor Rotimi Amaechi, have warned a member of the House and “speaker” of the five lawmakers considered anti-Amaechi, Hon. Evans Bapakaye Bipi, to desist from impersonating the Speaker of the House, Rt. Hon. Dan Otelemaba Amachree.

Information Nigeria reports that the Mr. Bipi, a protégé of First Lady, Dame Patience Jonathan and ardent supporter of Minister of State for Education, Barrister Nyesom Wike, was illegally elected speaker by five of the 32-member House last week, who had earlier “impeached the Speaker”; a move that led to an open confrontation among the lawmakers.

Bipi and his group, with the tacit support of the police in the state and a faction of the state chapter of Peoples Democratic Party (PDP) led by Mr. Felix Obuah, insisted on the legality of his election insisting that Amachree remains impeached.

However, in a statement titled: “Our Position,” on Friday morning, the 27 lawmakers explained their roles in the recent crisis and concluded that Bipi is an impostor.

The statement chronicled the events leading to the purported impeachment claim by five members of the House and urged the public to disregard the false claims.

“The attention of the Rivers State House of Assembly has been drawn to the plethora of stories and conjectures that have constituted the bulk analysis at the public domain on the crisis of Tuesday 9th of July, 2013… the House leadership received a communication from the Executive to amend the Rivers State Appropriation Law 2013. Sequel to this, the House reconvened on the 9th of July, 2013.

“Following the reconvening of the House on 9th of July, 2013, five members of the Rivers State House of Assembly (Evans Bipi, Okechukwu Michael Chinda, Kelechi Nwogu, Victor Ihunwo and Martins Amaewhule) in alliance with the Rivers State Police Command and their thugs, carried out unprovoked attack and assault on members including the Speaker (Rt. Hon. Otelemaba Dan Amachree), the Leader of the House (Hon. Chidi Lloyd) and Hon. Wanjoku Chikere Azubuike.

“Since the botched impeachment attempt, one Hon. Evans Bipi has rather surreptitiously impersonated the Speaker of the Rivers State House of Assembly in Defiance and gross violation of the laws of the Federal Republic of Nigeria and has gone ahead to make publications in the national media. We hereby call on the public to disregard the impostor (Hon. Evans Bapakaye Bipi) and his fabricated fallacies which are targeted at misinforming the general public,” the statement read.

The lawmakers further explained that they (House of Assembly) acted within the confines of the law in the issue regarding the suspension of the Obio/Akpor Local Governmet Council which is believed to be at the heart of the political fracas in the state.