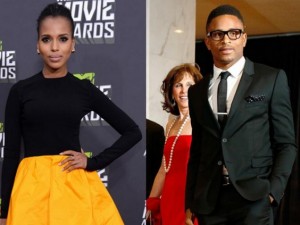 Yet another big-shot in Hollywood has sealed the knot with another Nigerian brother.

Kerry Washington is presently 36-year old while her hubby is 3a new trend here?

Anyway, the couple got married secretly on June 24 in Hailey, Idaho. They obtained their marriage licenses in front of Kerry’s parents, Earl and Valerie Washington who stood as as witnesses to the holy union and also the groom’s sister, Chisaraokwu Asomugha, as the officiant.

Sources say they have been dating since last summer but have tried and succeeded to keep everything on a hush-hush.