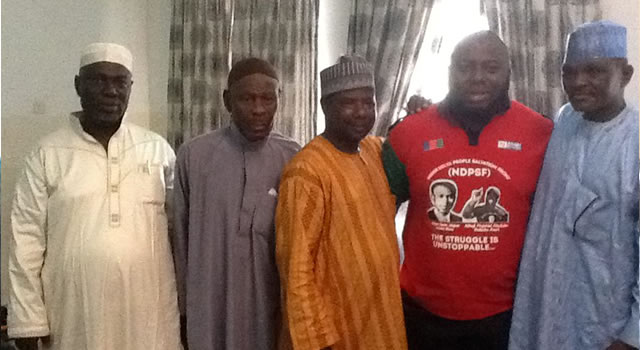 After his surprise visit to founder of Synagogue Church of All Nations (SCOAN) upon his release from prison, Major Hamza Al-Mustapha on Sunday paid an unusual visit to the leader of the Niger Delta Peoples Volunteer Force (NDPVF), Alhaji Mujaheed Dokubo-Asari, in his Abuja residence.

Dokubo, who said he was convinced that Al-Mustapha did not kill the late Alhaja Kudirat Abiola, an allegation that led to his arrest and subsequent incarceration in the last 14 years, urged him to forgive his accusers and all those who made sure he was kept behind bars

He said: “For me as a person, I was very convinced that you were not part of what happened because I was very close to Kudirat and I was very close to the Lagos group that was responsible for the judicial manipulation that was going on. And I wrote those things and people said we were paid to write. People believe that anybody who says the truth or has a contrary opinion has been paid to do it.”

The militant leader thanked God for sparing Al-Mustapha’s life while in prison even as he expressed joy that truth had finally prevailed.

According to him, “We just thank God that this is not a period for politics and making political statements but what is important is that the truth has prevailed and the hypocrisy of those who wanted to sacrifice an innocent man to satisfy their perceived interest.

“As a brother, I will tell you to forgive all the people who have offended you over these years, those who have kept you there. In one way or another, they would have killed you if you have not been away but Allah who kept you alive this period of difficulty when it was
quite easy to kill you didn’t put it in their mind.”

“For me, forgive them. It is when you forgive that you gain more benefits from Allah.”

In his response, Al-Mustapha recalled his days in detention and said of all the years he spent working with the late General Abacha, the only crime he was accused of was the murder of Alhaja Kudirat; one he said his accusers could not prove because he did not do it.

He said: “You know there were 10 panels I faced in five years. None of these panels found me guilty of anything. My offence was just one: Mrs Abiola’s murder. All in all, I stayed for five years and two months in solitary detention.”

While singing his self-praise for choosing not to take over the reins of leadership and chart a different course upon the death of the late despotic ruler, Al-Mustapha, lamented that some people cashed in on his humility and loyalty to the service of the country to punish him unjustly.

He said: “Ours is to serve, preserve the country and I did. If I had wanted, after the death of General Sani Abacha, this country would have witnessed another thing. But in our character, ours is to serve the country and I did. Nobody fired one bullet the day General Abacha died. God gave me the courage. But there were so many confusion, so many agitation at that time.

“But God used me to stabilise a course and it is the course that gave birth to this democracy. So, if I had not done so that time, we would have changed the course of history. Bur because we kept quiet, we were humble and committed to the country, people now turned it around.”