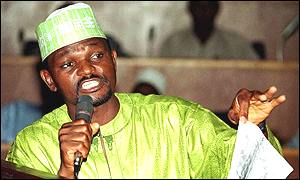 The Nigerian Army Monday confirmed that Major Hamza Al-Mustapha, former Chief Security Officer to the late Head of State, Gen. Sani Abacha, is still a soldier in the Nigerian military.

This was made known by the Chief of Staff in the Directorate of the Army Public Relations, Col. John Agim, at a briefing by the Joint Security Services Public Information Committee.

Speaking on the status of Al-Mustapha following his acquittal over the murder of Alhaja Kudirat Abiola last week, Col. Agbim said, “with regards to Al-Mustapha’s release, well I want to confirm that he is still in the Army.

“The case is going to be handled by the Army administratively in line with the Harmonised Terms and Conditions of Service.”

To underscore his assertion that Al-Mustapha is serving military personnel and recognized as such, Col. Agbim added, “Throughout his detention and trial that lasted over 15 years, Major Al-Mustapha was receiving his full entitlements as a soldier of the Nigerian Army in the rank of Major.

“And since he is a member of the Nigerian Defence Academy Regular Course 28, Al-Mustapha is going to be asked to apply for voluntary retirement from the Army as members of the course are already in the two-star rank of Major Generals.”

Speaking in the same vein, a military source stated that “the best Al-Mustapha can get from the system in the circumstances is to apply for voluntary retirement or wait for one to be written to him as he has been caught by the barrier of age on rank. The issue of promotion is off the cards, as even if he gets promoted to the next rank of Lieutenant Colonel, he will still be two full senior ranks away from his course mates.”