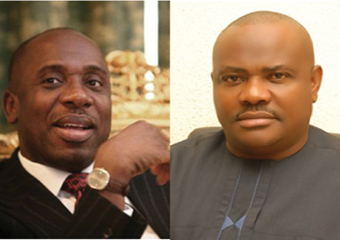 Embattled Rivers State Governor, Chibuike Rotimi Amaechi, has described his former Chief of Staff and Minister of State for Education, Nyesom Wike, as “too small and insignificant to discuss.”

Wike, who was once a political ally of Amaechi, has recently been involved in a battle of supremacy with his benefactor.

Amaechi made this known Saturday during a thanksgiving church service to mark the 60th birthday of the former President of the Nigerian Bar Association, Chief O.C.J. Okocha (SAN), at the Emmanuel Anglican Church in Port Harcourt.

The governor, who was responding to the questions thrown in his direction by the officiating priest, the Bishop of Anglican Communion, Niger Delta Diocese, Archbishop Ignatius Kattey, could not hide his regrets about how most of the people that betrayed him were from his Ikwerre ethnic group.

Amaechi recalled that he nominated some of his kinsmen, including Wike and the former Deputy Speaker of the House of Representatives, Chief Austin Okpara, into political positions, but regretted that they turned around to betray him.

“My greatest fear is that where am I going after here on earth? Let me also tell you that I have been betrayed several times in politics and majority of those who betrayed me are from my Ikwerre ethnic group.

On Opara, Governor Amaechi remarked that the former deputy speaker betrayed him when he most needed his support.