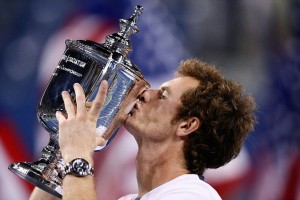 Andy Murray has ended Britain’s agonising 77-year wait for a Wimbledon men’s singles champion when he beat world number one Novak Djokovic, 6-4, 7-5, 6-4 in on Sunday, becoming the country’s first male winner since Fred Perry in 1936.

It was Murray’s second Grand Slam title to follow his breakthrough triumph at the US Open in 2012 which followed his Olympic gold medal as well as a heartbreaking, tearful loss to Roger Federer in the Wimbledon final.

However, Sunday’s title showdown, between two men who have now contested three of the last four Grand Slam finals, rarely lived up to expectations.

Both struggled in the stifling 40-degree heat and the top-seeded Serb, who had beaten Murray in the Australian Open final in January, looked jaded after his record four hour 43-minute semi-final victory over Juan Martin del Potro.

And despite leads of 4-1 in the second set and 4-2 in the third, he was out-hit by Murray who finished with 36 winners to 31, with 21 unforced errors to the Serb’s 40 and having carved out 17 break points in three hours and nine minutes of action.

Being spurred on his road to the final by former Manchester United manager Sir Alex Ferguson, and watched by Victoria Beckham, Wayne Rooney as well as Hollywood stars Gerard Butler and Bradley Cooper, who all watched the final, Murray broke no hearts, well…except for Djokovic’s who is almost getting used to winning, and probably his supporters.