The national chairman of the newly formed Unity Party of Nigeria (UPN), Dr. Fredrick Fasehun and a member of the House of Representatives, Hon. Opeyemi Bamidele (ACN, Ekiti), have been accused of acting out a script by the Presidency to destabilise the Ekiti State chapter of the Action Congress of Nigeria (ACN).

This claim was contained in a statement issued by the Director of Publicity of the ACN in the state, Mr. Segun Dipe, and made available to newsmen in Ado Ekiti on Saturday.

The ACN was reacting to Fasehun’s criticism of the removal of Bamidele as the Chairman of Ekiti State Caucus in the House of Representatives last week. A move national leader of the ACN, Senator Bola Ahmed Tinubu asked to be reversed.

Fasehun, who is also the founder of Oodua People’s Congress (OPC), also raised the alarm on Bamidele’s safety. 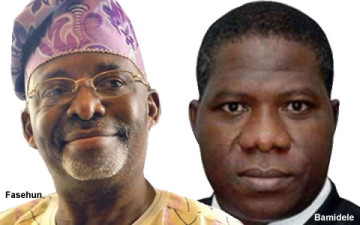 However, in its reaction, ACN berated both Fasehun and Bamidele, describing them as tools in the hands of the Presidency to disorganize the ruling party in state.

“We know the antecedents of both Fasehun and Opeyemi as opportunistic politicians and crumb-eaters from the Abuja table and they should stop fooling members of the public with their fake progressive claims.

“We find it curious that Fasehun would want to dictate the dimension of internal workings of the ACN, just because one of his co-travellers in the “presidency plot” to undermine the party was removed as chairman of the Ekiti caucus in the House of Representatives by his colleagues.

“We are not surprised that Fasehun is crying more than the bereaved, as both himself and Opeyemi are tools in the hands of the Presidency in a plot that has failed before it was hatched,” the statement read in part.

Warning Fasehun to stop meddling in its affairs as he is not a stakeholder in the party, ACN stressed that there was nothing the Presidency could do about the endorsement of Governor Kayode Fayemi by the national and state leaders of the ACN.

“ACN is a democratic party and there are processes for nominating candidates for election. Fasehun is not a member of the party and cannot lay claim to be a stakeholder in the party to talk about internal democracy.

“Why did he not complain about internal democracy when his ‘boy’ Opeyemi was given the House of Representatives ticket which he did not contest for? We hope Fasehun and his cohorts will mind their business and not meddle with internal issues within ACN,” it further read.