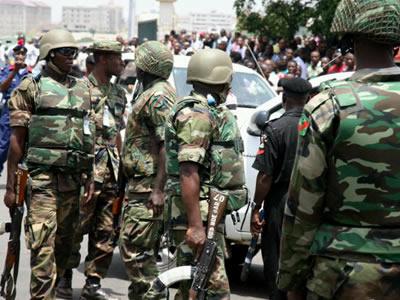 The fight against the Boko Haram insurgency in Borno is 80 to 85 per cent completed, Sagir Musa, the spokesperson of the Joint Task Force, JTF, Operation Restore Order, has said.

Musa, a Lieutenant Colonel, stated on Friday in Maiduguri.

He said that the Boko Haram sect was now in disarray with no central authority, co-ordination or administration.

“Most of the terrorists’ commanders and foot soldiers have either been arrested or killed in their daily encounter with the JTF. We have been able to destroy all identified Boko Haram camps and have recovered many arms, ammunition and Improvised Explosive Device, IED, materials.”

He said the JTF had restored order in its area of responsibility and that people could now move about freely, while schools and other public institutions had reopened.

“The situation has also created economic and social relief and has led to the emergence of youth vigilante groups.”

Mr. Musa said that the emergence of the vigilante groups had had serious impact on the society.

“The JTF welcomes and commends the emergence of the (vigilante) group,” he said, adding that the concern of the public about the perceived excesses of the group was being addressed.

“We are monitoring, guiding and regulating the attitudinal disposition of the group in terms of the way they display their weapons and approach members of the public,” he said.

The JTF spokesman said the involvement of the youth was “the highest testimony that the people were appreciative and supportive of the JTF and its activities.”

He commended residents of the state for their patience, resilience, understanding, cooperation and support.