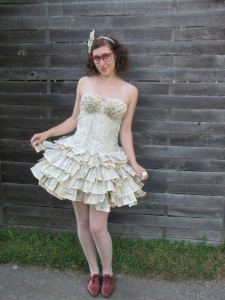 Canadian actress Jodi Phillips spent months tearing pages out of an old thesaurus and gluing them together to create an awe-inspiring strapless paper dress. After uploading photos of her wearing the unique garment to Reddit, she garnered more attention than she had ever hoped for.

Two years ago, Jodi Phillips was asked by a committee member for the Denman Island Readers and Writers Festival if she could design a bookworm costume to greet visitors during the four-day event. A bookworm herself, Jodi decided the best way to do it was to make a dress almost entirely from book pages. So she started scouring thrift stores for the perfect book for the job, and finally found an old thesaurus. Although she doesn’t remember exactly how many hours she put into making her stunning dress, the aspiring actress says she through two full seasons her favorite television show, How I Met Your Mother, tearing, folding and gluing pages. Lined with fabric and featuring a bodice for body support, Jody’s recycled dress is completely covered with hundreds of yellowed pages from thesaurus sections A through O. “It feels quite comfy actually,if not a little hot, although its hard to move without ripping it,” Jodi says. “The parts that are scaled are actually the parts that don’t move. It has pages bunched up on the parts that stretch so they sorta inchworm out when it moves.”

Jodi wore her amazing dress at this year’s Denman Island Readers and Writers Festival, where she made quite an impression on attendants. After uploading a series of photos of her dressed in paper and wearing a “Miss Spelled” sash on Reddit, she got almost 100,000 page views and started getting calls from established media outlets like Mashable, the Daily Mail and Good Morning America, who wanted to speak with her about the novel costume. “It’s kind of crazy,” Phillips says. “Hopefully this can show that not everybody out there is like me.”

For now, the thesaurus page dress is stored in a box, but not for very long, as Phillips says she has received calls from members of Vancouver’s arts community who want to use it in plays and art shows. The young actress is also thinking about making more fashionable outfits out of paper.

Jodi Phillips’ creation is certainly unique, but in the past we’ve featured some other pretty incredible garments, like this prom dress made from pull tabs, the wedding dress mad from roses, or the dress made from human hair.