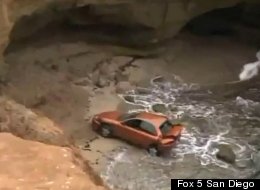 A suspected drunk driver is alive despite having driven his 4-door sedan off a 40-foot sea cliff in San Diego early Monday morning.

Incredibly, the unidentified driver was able to walk away from the crash site, something that couldn’t be said for his car, which had to be hoisted away with a crane.

The accident happened around 5:45 a.m.when the car plunged and landed on its wheels in the sand at the surf line at Sunset Cliff Beach.

The man got out of his car on his own and was met by two lifeguards who swam to the beach and a paramedic who rappelled down the cliff to the beach on a rope, according to Fox 5 San Diego.

Firefighter/paramedic Josh Miramontz said when he reached the suspect, the man was lying under the bluff and was combative with rescuers.

“He was fighting, screaming and yelling,” he told UT San Diego.

After about an hour after the crash was reported, the man was hoisted up from the beach via a rescue basket attached to a helicopter and taken to a nearby hospital. Any injuries suffered from the four-story plunge were not expected to be serious.

Police say the car apparently was moving fast when it smashed through a locked gate and went over the bluff, the Associated Press reported.

Although officials suspect the man may have been drinking, charges haven’t been filed.