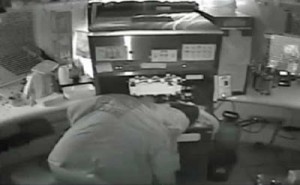 A man who broke into an ice cream store surprisingly was not looking for cash as he headed straight to the soft-serve ice cream machine.

One would think that he would go for the cash. But not this thief. He headed to the ice cream machine. He did not even take a bowl of ice cream, instead, he dispensed the soft ice cream directly into his mouth.

Only after satisfying his sweet tooth did he head to the cash register to look for money but the register was empty, so the man left the store. Police are asking for the public’s help in identifying the thief.