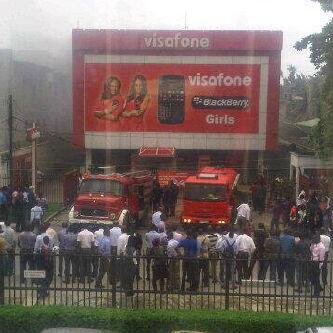 No life was lost, recharge cards and equipment, said to be worth millions of naira, were lost to the fire which lasted for hours.

Although the cause of the fire could not be ascertained, firefighters told newsmen that the fire began on the ground floor of the building.

The fire was said to have started from the vault, where recharge cards are stored.

Director, Lagos State Fire and Safety Service, Razaq Fadipe, was quoted as saying that over 50,000 litres of water was used in putting out the fire, yet it proved difficult to put out because of the peculiarity of the building.

According to him, “There was fire outbreak around 12.56pm at 33 Saka Tinubu Street, Victoria Island, which is where the national sales office of Visafone is located. We rushed down to the scene and were able to evacuate all the occupants of the building.

“Initially, we thought the fire was on the first floor because of the direction of the smoke but we later discovered that the fire was from the recharge room otherwise known as the vault. There was no water at the company so I had to get three fire trucks from Onikan, Eti-Osa and Lagos Island fire stations.

“The Federal Fire Service also provided a truck of water but the fire proved stubborn. Each truck contains 10,000 litres and they all had to refill twice each in order to put out the fire. The office was arranged in such a way that hindered our work.”

Fadipe stressed the need for companies to organise fire drills for their staff as this would let them know what to do in case of fire.